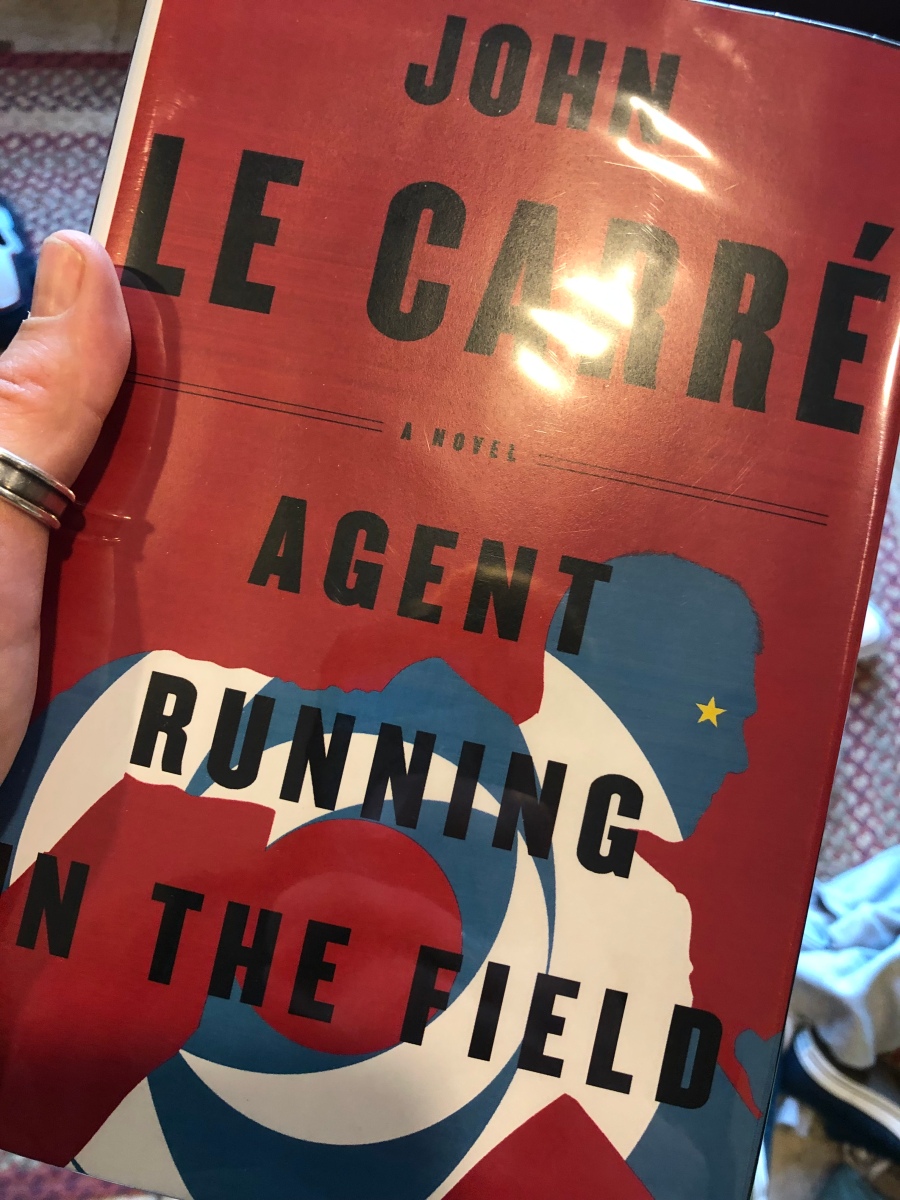 I debated putting this out there, but decided that today is the day and not to wait.

I received a huge surprise in the mail over the weekend. A package sent from Cornwall arrived on my doorstep.

I’ve been eagerly awaiting the October release of Agent Running in the Field and in early April what do I receive but what appears to be an early copy of the book.

I’ll be honest, I was flabbergasted. I opened it up and it was signed, of course.

But what really threw me was the first page. It’s only the prologue, so I figured it can’t hurt to put it out there. The first page is shocking enough. Don’t worry, you will get no further spoilers from me!

I’ve typed out the text below –

George Smiley peered at the ringing phone, looking away from an open copy of Heinrich Heine’s Buch der Lieder sitting on his desk.
‘Hello?’
‘George, it’s Peter, they’ve done it, they’ve actually done it. They’re going to Brexit.’
The line goes silent.
‘You know what this means, George.’
‘Yes. We begin Operation No Exit. You call Percy, Jim and the rest. I’ll reach out to Charlie, Pine, Barley, Pendleton and Toby Bell. It’s time to pull a team together that can put an end to this.
‘And we have an agent running in the field who might help too. I could never tell you before, Peter. Leamas survived.’

The first page alone tips the apple cart for what we were expecting in this novel. First, Smiley is back. I had a sense that perhaps le Carré was just getting back in the groove in his writing for Smiley with A Legacy of Spies, but this is still unexpected.

However greater surprises are yet to come. Smiley is planning something to stop Brexit?!? And it appears that he’s calling together a who’s who of his later books, Charlie from Little Drummer Girl, Pine from The Night Manager and more. It’s like he’s decided to go all in on a shared le Carré universe.

Finally, the biggest revelation – Leamas survived his encounter with the Berlin Wall. Wow. All I know is a can’t wait to read what else le Carré has planned for Agent Running in the Field. I’m getting to reading, everyone else, it’s going to be a long wait until October!

Update: This was of course, an April Fools’ Day joke. I blatantly stole the idea from the hilarious London Review Bookshop twitter feed from the release of A Legacy of Spies although I went to a bit more effort to match the real book version of Legacy.

guillam's reunion with Smiley in the new John le Carré is one of the most moving passages I've read this year. absolutely beautiful pic.twitter.com/eXFypOUz7l

only just saw this but it is incredible – the latest John le Carre contains a hidden prediction for the Costa Poetry Prize 2017 – just look at the beginnings of the lines! pic.twitter.com/gS5S836UGO